Yesterday was the Final of our Club Championship and it was contested between 2 previous Club Champions. David McFarlane taking part in his 7th Final, Paul Dorrian in his 4th Final. There was also the added interest of Youth Member vs Senior Member with 36 years between the 2 players and given the fact David has just resumed golf after 20 months away due to having knee operations it would be interesting to see if the physical element would play a part.

It was an enthralling final with David coming out of the blocks early and going to the turn in 33 and 4 up on Paul. David won the 11th to go 5 up so it was interesting to see if Paul would stage a fightback. Paul did manage to pull a couple of holes back however a par at the 18th for David was enough to take a 4 hole lead into the second round.

The expectation in the clubhouse was that Paul would come out fired up for the afternoon round and maybe lack of match golf from David would provide an opening.

This was indeed the case and Paul won 4 holes in a row from 4th to 7th to level the match.
Pauls distance advantage proved crucial at the 9th and he was able to find the green in 2 and 2 putt for par, David played a great 3rd shot from about 60 yards to get within 10 feet but failed to hole the putt. This put Paul ahead for the first time and he was to go further ahead at 10 after a great chip to 3 feet.

At this point the crowd felt that the game was just going to go one way but there was to be a major suprise in store. Walking up 11 David announced to his Caddie that he was going to play the next 4 holes in 4, 3, 2, 3, however after still being 63 yards short of the pin after 2 shots it didn’t look like the forecast was on. David played a majestic shot to 3 feet and Paul who was already pin high also chipped to 3ft. Paul missed and David holed, Game was back to 1.

At the 12th Paul outdrove David by at least 70 yards with David having about 160 to the green. David played another great shot from 160 yards to 3 feet and Paul played a wedge to about 10ft. Paul missed and David holed, Game back to All Square.

At 13th David hit his tee shot to about 15 feet and Paul was about 25 feet both players just missed so game continued all square.

At the 14th Paul yet again had a massive distance advantage but David put his second shot on the Green 12 feet away, Pauls shot went to the back of the green and he chipped close, however David made the Putt for 3. David was now 1up, this was a remarkable turn around and the crowd watching were loving the twists and turns in the game.

At the 15th we again seen Paul with his distance advantage manage to get on the green in 2 even against a bit of a breeze. David was unable to reach in two and this time he failed to get up and down so Paul had 2 putts to win the hole ( albeit the 2 putts were almost the full length of the 15th Green ). Paul managed to get the first putt to within 3 feet and holed to square the match.

16 & 17 were halved albeit with David making another brave up and down from about 40 yards short of the green at 17. Tremendous spirit.

Onto the final hole and Paul drove down to the 100 yard mark whereas David was about 50 yards further back and the ball wasn’t lying too well. As a result Davids shot came up well short and Paul then played his shot from the perfect place and put the ball into about 4 feet.
David was unable to get up and down this time and conceded the final Putt to Paul.

Congratulations go to both players on a very exciting match and especially to Paul for his 4th Title. It was a match played in great spirit and all those who witnessed it won’t forget in a while. 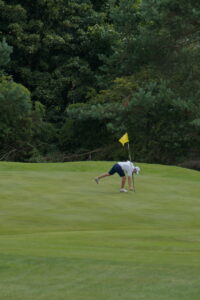 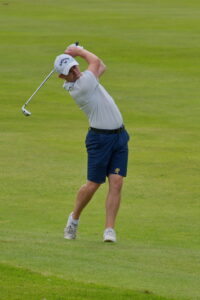 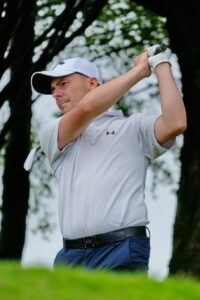 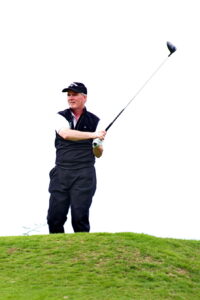 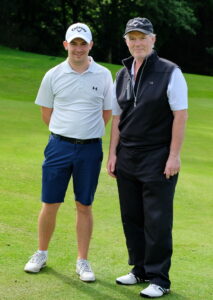 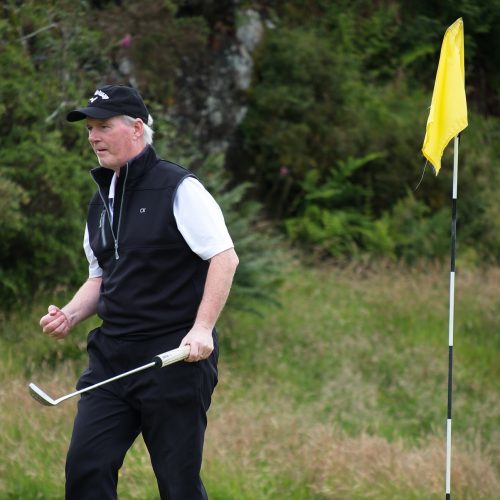 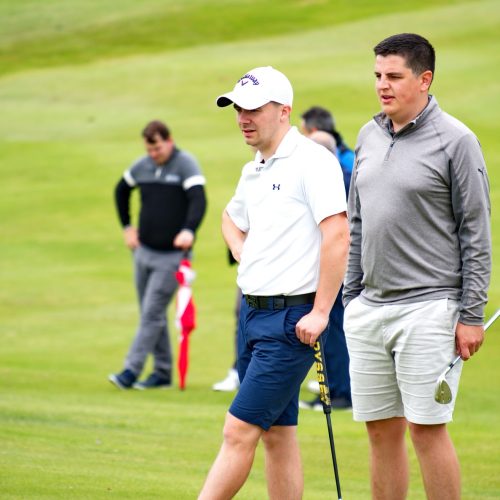 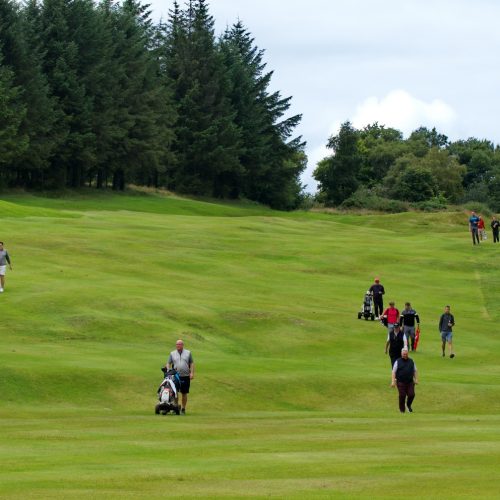